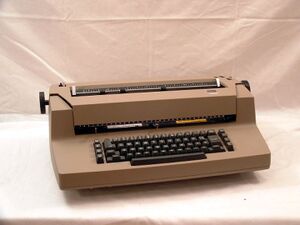 The CPT 4200 Typewriter in our collection 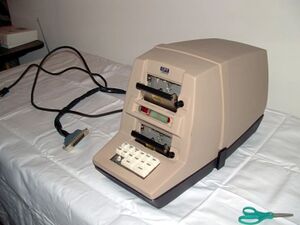 The CPT 4200 Console in our collection

The typewriter is a modified IBM Selectric that has been transformed into a CPT Rotary II by relegating power transformation duties to the console and adding an interface that allows communication with the console. Six special keys have also been added that control how typed information is recorded onto the console cassette deck.

The console connects to a wall socket for power, and in turn provides power to the typewriter. The console and the typewriter are connected together with a bidirectional data cable for recording of typed information onto tapes in the console, and automated retyping (aka printing) of information stored on tapes read by the console. A volatile memory buffer in the console stores up to 200 characters (one line of text or less) before they are written to tape. Each CPT Cassette tape stores about 40 pages on 140 feet of magnetic tape. 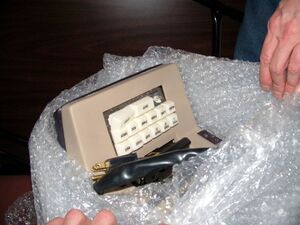 Early this January, Martin and Mike unboxed a CPT 4200 word processing system donated by Jeffery in Minneapolis, Minnesota. It is now a great addition to the museum collection.

He wrote to the museum with the donation offer in early September 2004. "I have available for donation a CPT 4200 Series word processor, a mid-1970's dedicated word processor with modified Selectric typewriter [rebadged as a CPT Rotary II] and audio cassette-based storage system," he said in the email. The donation also included the user manual, dust covers and extra Selectric ball.

He also included these specs, which prove just how hefty the 4200 is:

It arrived in two well packed boxes, but not well packed enough to prevent some minor shipping damage to the cassette storage system (the key that is missing in all the photos was later reattached without a problem). True to form, the modified selectric held up like a tank. We took off the case of the cassette storage box to reseat the internals, and got a look at the amazing archaic mechanical relay switches and the ten circuit boards, each of which controls a separate function. 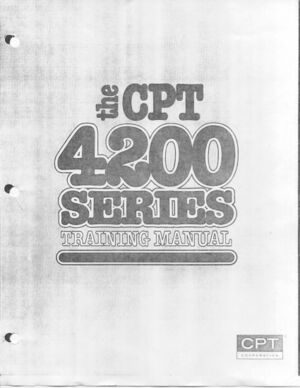 Front cover of the manual

The Highland Historic Computer Museum received a photocopied manual titled The CPT 4200 Series Training Manual with this donation. It has been reproduced here in multiple forms for research and study of computer history.