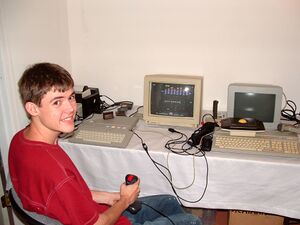 Hi, I'm Martin Burch, a college student living in New Mexico, USA. Along with my uncle, Mike Burch, I am one of the founding curators of the Highland Historic Computer Museum.

I visit the museum's physical location in Highland, Maryland biannually and can deliver historical computers donated in the southwest.

The following pages in my userspace are currently in development:

At age 5, in 1992, I was playing maze games and playing around in Wordperfect on my local library's only computer. The same year, Microsoft released Windows 3.1, just in time for me to "surf the web" on Mosaic for Windows 1.0 when it was released a year later. I remember the release of early beta versions of Netscape and the 1.0 release in 1994, the only versions to use the primitive blue "N". The early "What's Hot" "What's Cool" and "What's New" pages got a lot of page views by me.

The release of Windows 95 meant a visit to my home town by Microsoft to demonstrate the coolest feature of 95 — a 3d game packaged with the OS. The response by the local Mac community was swift — Macintosh OS not only looks like this new OS, it does everything this one can do too.

In 1997, I remember when the Mars Pathfinder mission was a big hit on nasa.gov (with their old server side imagemap homepage design), and up until 1998 I was still using Pine and a telnet connection for email.

For me, the museum is about recreating the exciting early years of microcomputing — years that I never experienced.

Of course I have other interests and skills — like webpage and forum design, Volkswagon super beetles, horticulture, photography, science fiction, cats, reading and finishing my school assignments — but I still have time to be interested in old computers. How do I do it? Procrastination on my school assignments.

Galaxian, the evolution of space invaders and the predecessor to the better known Galaga as well as many other games, is my favorite eight-bit computer game. It's fun to play and makes a great demo. Auctually, Galaxian was created by Namco for arcade machines, but a port to the Atari 2600 home game console led to a flurry of Atari written ports.

Currently, the museum has Galaxian ports for:

I'm always on the lookout for more Galaxian-related stuff!