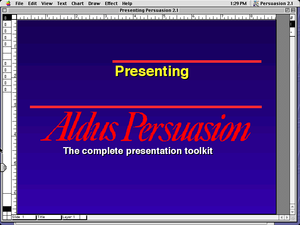 A screenshot of Aldus Persuasion 2.1 displaying a demo slideshow.

Released in May 1992, Aldus Persuasion 2.1 for Macintosh was an early presentation software product similar to the now better-known Microsoft PowerPoint. It retailed for $495 from Aldus Corporation and was released alongside the first Windows-compatible version of the product. It featured the ability to embed QuickTime-format movies and offered Persuasion Player, a standalone player application that could be used to play slideshows on computers that did not have Persuasion installed.

Aldus, better known for its PageMaker layout software, later merged with Adobe in 1994 and went on to release two more major versions of Persuasion before discontinuing the product.