Chromasette tape, as pictured in the included newsletters.

Chromasette was the first tape-based magazine for the TRS-80 (or Tandy) Color Computer. The monthly collection of "games, teaching or utility programs" [1] was published by CLOAD, the Santa Barbara, California-based publishers of a periodical by the same name for the earlier (black and white) TRS-80 models. The first issue of Chromasette was dated July 1981, and the final issue was likely published in April 1984.

"Chromasette is very much like CLOAD, with a cassette wrapped in an accompanying letter that lists the programs," writes Stephen Gray in Creative Computing.

The accompanying explanatory letter is perhaps most famous for nicknaming the Color Computer the CoCo in the October 1982 issue. 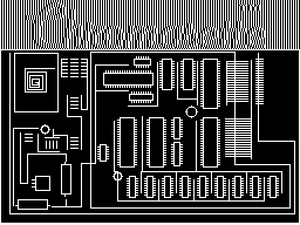 A still from the June 1983 cover program.

The first program on each month's cassette tape is a "cover" that, when loaded and run, displays the Chromasette name and a clever demo, often seasonal or related to a topic explored in other programs on the tape. Each of the cassette tapes in our collection includes 7 or 8 programs in addition to the cover program.

The museum has created PDF and cassette files to preserve Chromasette newsletters and tapes and make them available for study.

The cassette files were created using the original CoCo cassette interface attached to a Roland Edirol UA-1EX USB audio interface. The resulting files were split and processed in WaveGain before being converted to .CAS files, which can be run successfully in many emulators. We created the .CAS files with CASIN written by Jeff Vavasour (in 1994).

The Chromasette newsletters and cover programs we have archived are available to download. The issues listed below represent all the issues in our collection (if you can provide the missing issues, please let us know).